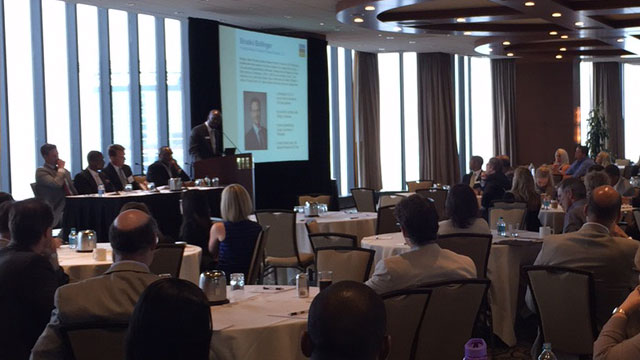 Attorney Al Coleman, a partner in the firm’s Corporate & Business Group which hosted the event, introduced the athletes-turned-entrepreneurs at the Gray Plant Mooty event.  Each panelist discussed their struggles after leaving professional football.

“I met with anyone who would have a meeting with me,” said Bollinger, a four-year starting quarterback at Wisconsin who recently became a financial advisor at Freedom Financial Partners. “I had to legitimize myself because I’m ‘a football guy.’”

The concept of disruptive innovation is a business theory developed by Harvard professor Clayton Christensen and popularized by Whitney Johnson, a speaker and co-founder of Rose Park Advisors. Disruptive innovation explores how successful companies reinvent themselves by embracing fresh models to displace their competitors.

Thursday’s event focused on how people, too, are at times compelled to reinvent.

For Jack Brewer, a former Minnesota Vikings team captain and current CEO of the Brewer Group, the transition to the corporate world should have been easy. Brewer launched his first company at age 19.

“Working in business outside of football was my passion, said Brewer, adding that the transition required patience and a lot of hard work. “It took a lot of rebranding.”

The players were candid about their struggles and failures. But many said those events helped them succeed later.

“Anyone who is successful has failed an awful lot,” said Eilers, a former Notre Dame standout who spent six seasons in the NFL.

Eilers shared a story from early in his career in which he flew to the home of an NFL coach (without being invited) to ask for a contract after his professional prospects appeared stalled.

“A lot of life is just having the confidence to show up,” said Eilers, a managing director at Madison Dearborn Partners, LLC.

Overcoming adversity and using it as a force of innovation was, perhaps unsurprisingly, a common theme during the discussions. Careers in the NFL are often short, compelling players to reinvent themselves off the field.

Darrell Thompson’s reckoning came when he placed a phone call to his wife to tell her he failed a physical. His career was over. “My whole identity was tied to football,” said Thompson, a Gopher standout selected in the first round by the Green Bay Packers in the 1990 draft.

Thompson, now the president of Bolder Options, a Minneapolis-based organization focused on youth development, had to overcome a fear of speaking following his transition out of the NFL. “I had to get out of my comfort zone,” said Thompson. “I had to learn to get comfortable in my own skin.”

The Gray Plant Mooty Corporate & Business Group team of more than 50 attorneys—many of whom possess personal experience as in-house counsel, board members, and business people—are among the most experienced business lawyers in the Midwest region.