On May 12, 2016, the Federal Circuit reversed the District Court and found two software-related patents “directed to an innovative logical model for a computer database” patent eligible under 35 U.S.C. §101 [Enfish, LLC, v. Microsoft Corp. et. al., Appeal No. 2015-1244, (Fed. Cir. May 12, 2016)]. In only one case out of approximately 20 (DDR Holdings LLS v. Hotels.com), had the Federal Circuit previously found a software invention patent eligible under 35 U.S.C. §101 post-Alice. The Enfish ruling, however, emphasizes additional tools for overcoming Alice with respect to software patents. Following the Enfish decision, Deputy Commissioner for Patent Examination Policy Robert W. Bahr, in a May 19 Memorandum to the Patent Examining Corps (“Enfish Memo”), reiterated the importance of the Enfish decision and the tools it provided.

In particular, when fighting Alice, the Enfish decision, as highlighted by the Enfish Memo, points to use of the following strategies/tools:

1. Fight for an appropriate level of abstraction

Too often, Examiners apply boilerplate §101 rejections without identifying the abstract idea. Enfish reiterates that the abstract idea asserted by Examiners during prosecution (or opposing party during litigation) must be at a level of abstraction supported by the language of the claims and cannot be too high of a level of abstraction. The latter poses the all-too-real risk of “ensur[ing] that the exceptions [i.e. abstractness] to §101 swallow the rule.”

In Enfish, the Federal Circuit only analyzed the first step of the Alice test (i.e. whether the claims are related to an abstract idea) finding that the District Court improperly applied a “high level of abstraction.” The District Court found that “the claims were directed to the abstract idea of ‘storing, organizing, and retrieving memory in a logical table’ or, more simply, ‘the concept of organizing information using tabular formats.’” The Federal Circuit stated that “describing the claims at such a high level of abstraction and untethered from the language of the claims all but ensures that the exceptions to §101 swallow the rule.” Instead, the Court focused on the claimed self-referential database that was a specific improvement to the way computers operate, thereby bringing the claims out of the abstract idea category.

Therefore, fight for an appropriate level of abstraction using the language of the claims as support for your argument.

2. Describe how your invention is an improvement on a given technology

The Enfish claims were able to avoid the “significantly more” step of the Alice test because the Court saw “no reason to conclude that all claims directed to improvements in computer-related technology, including those directed to software, are abstract.” As such, the Enfish Court’s decision now adds a new tool to overcome the first step of the Alice test by providing insight as to what exactly is an “abstract idea.” Where previously this first step had little guidance as to the definition of an “abstract idea,” the Enfish decision now specifies that those inventions “‘purport[ing] to improve the functioning of the computer itself,’ [such as flexibility and speed] or ‘improv[ing] an existing technological process’ might not succumb to the abstract idea exception.” This is key to avoiding the “significantly more” prong under the second step of Alice which most §101 decisions hinge upon (i.e. if the claims are directed to an abstract idea, do they amount to ‘significantly more’ than the abstract idea).

3. Don’t be afraid to define, and then disparage, known conventional art

The §101 analysis is a subjective blend of what is known in the art, what is “abstract, ” and what is “significantly more.” Defining what is “conventional” may remove a subjective aspect from the §101 analysis. And now, as shown in Enfish, comparison to conventionality in the specification can be telling evidence for overcoming a §101 rejection. The specification confirmed the Court’s analysis by defining how the invention was an improvement on the computer itself rather than mere “‘storing, organizing, and retrieving memory in a logical table’ or more simply, ‘the concept of organizing information using tabular formats.’”

The Federal Circuit specifically noted: “[t]he specification’s disparagement of conventional data structures, combined with language describing ‘the present invention’ as including the features that make up a self-referential table, confirm that our characterization of the ‘invention’ for the purposes of the §101 analysis has not been deceived by the ‘draftsman’s art.’” Thus, the Court relied on the specification’s extensive discussion of the “conventional” prior art to support its conclusion.

Defining conventionality, however, still must be balanced with KSR in that admissions to prior art can provide arguments for a §102/§103 rejection. As such, it is important to carefully craft what is conventional in, for example, the Background section, while leaving discussion of benefits and advantages provided by your invention for the Detailed Description. Moreover, avoid indicating predictability in the invention resulting from what is defined as conventional.

How the tools were used in Enfish

The above discussed tools were applied by the Federal Circuit resulting in a finding that the Enfish claims were patent eligible.

The claims at issue relate to a “self-referential” database structure. In the specification, this structure was compared to a “relational model” that was known in the prior art. A synopsis of the two structures is provided below: 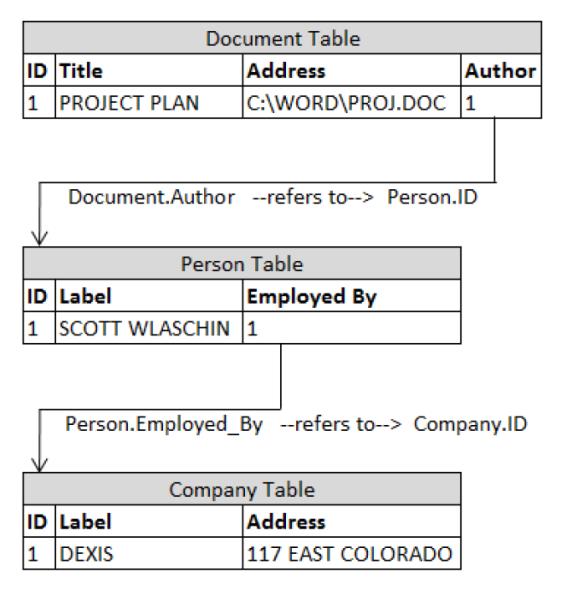 Shown above is the relational model analyzed by the Federal Circuit in Enfish. The Court’s example included three tables, the Document Table, the Person (i.e., the author of the document) Table, and the Company (i.e., the employer of the person) Table, where values within a given row of one table referred to a separate table. For example, following the arrows in the table to the left, the “1” in the author column of the Document Table refers to ID number “1” in the Person Table.

• Self-Referential Model (Claimed in the Patents on Appeal):

In contrast, the Table below represents the claimed “self-referential model.” The “#2” in the “Author” column refers intrinsically to its own ID “#2” instead of to an external table. Similarly, the “#3” in the “Employed by (#4)” column refers intrinsically to ID “#3”. The “self-referential” property is also established by the row ID = “#4” which is a special row that defines characteristics of a column in that same table (i.e. the “Employed by (#4)” column as identified by the Type=”Field”). In other words, the row ID = #4 allows for on-the-fly creation of column “Employed By (#4)”.

Applying tool #1 discussed above, the Federal Circuit urged that “the [Enfish] claims are not simply directed to any form of storing tabular data, but instead are specifically directed to a self-referential table for a computer database.” Applying tool #2 discussed above, the self-referential model was found to be an improvement to computer technology because the self-referential model provided “increased flexibility, faster search times, and smaller memory requirements.” And applying tool #3 discussed above, the Court noted “our conclusion that the claims are directed to an improvement of an existing technology is bolstered by the specification’s teachings that the claimed invention achieves other benefits over conventional databases.” Thus, each of these tools were effectively used to overcome §101 in view of the Alice test.

If you have any questions, please contact your Lathrop Gage attorney or the attorney listed above.