By Jesse Berg & Tim Johnson, with the assistance of Julia Marotte

The American Telemedicine Association (ATA) recently released two reports that compare and contrast telemedicine polices of every state in the U.S. The reports offer a state-by-state comparison, allowing providers to easily understand where their state fits in the telemedicine-adoption scheme. The first report focuses on coverage and reimbursement standards while the second report delves into physician practice standards and licensure requirements.

In each report, the ATA scored states on a number of factors and ultimately assigned a composite grade using an A-F grading scale. A top score (A) suggests a supportive policy landscape, whereas a failing score (F) suggests the presence of numerous barriers to telemedicine.

Coverage and Reimbursement for Telemedicine Services in the Midwest

The coverage and reimbursement report analyzed state policies according to two categories: health plan parity and Medicaid conditions of payment. Each of these two categories was broken down into indicators, with thirteen indicators overall. The ATA assessed state parity (with full parity being classified as comparable coverage for telemedicine services to that of in-person services) looking at private insurance, Medicaid, and state employee health plans. The ATA assessed Medicaid conditions of payment according to indicators such as eligible technologies, distance or geography restrictions, eligible providers, mental and behavioral health services, informed consent, and telepresenter requirements. 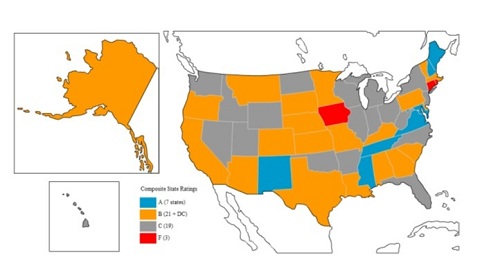 Minnesota’s composite score for coverage and reimbursement was a “B,” scoring above average and higher than both Wisconsin and North Dakota. Minnesota’s weak point was the parity category—the private insurance and state employee health plan indicators both earned a failing score. However, Minnesota received higher scores in the Medicaid conditions of payment category. Minnesota’s Medicaid policy covers telemedicine when performed by a licensed social worker or licensed professional counselor. In addition, Minnesota covers telemedicine services state-wide without distance restrictions or geographic distinctions.

Iowa received a failing score in every applicable indicator. Iowa does not have a parity law, and there is no coverage for telemedicine under Medicaid.

Physician Practice Standards and Licensure Requirements in the Midwest 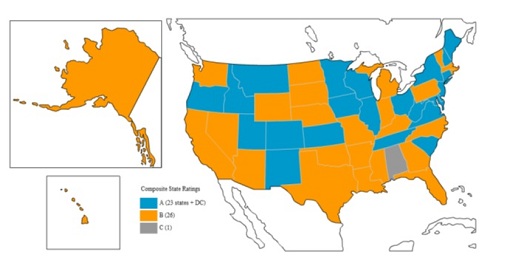 Minnesota, Wisconsin, Iowa, and Montana all received top composite scores (A). The physician practice standard requirements for telemedicine were largely on par with requirements for in-person services, not including prescribing. Importantly, in Minnesota and Montana, qualifying out-of-state physicians have the option of applying for a full license or a telemedicine permit, allowing physicians to practice in the state. This is particularly significant considering that licensure restrictions remain one of the largest hurdles for physicians practicing telemedicine.

North Dakota and South Dakota received composite scores of (B), with both states receiving a failing score in the licensure indicator due to their failure to allow licensure exemption for physician-to-physician and out-of-state consultation.

Lack of parity laws continues to be a large barrier to telemedicine in the Midwest. Without parity laws, private insurers are not required to cover telemedicine services to the same extent as in-person services. If coverage exists, it is often saddled with restrictions. For example, many telemedicine policies (including North Dakota’s Medicaid policy) condition payment on the patient being in a specified location. Only twenty-three states and DC do not specify a patient setting as a condition of payment (including Minnesota, South Dakota, Wisconsin, and Montana).

On a national level, licensure portability is a significant barrier. No state was awarded a top score (A) for this indicator. The ATA concluded, “This means that every state imposes a policy that makes practicing medicine across state lines difficult.” Minnesota and Montana are somewhat progressive, being two of only ten states that extend conditional or telemedicine license to out-of-state physicians. However, full reciprocity between boarding states is rare (being offered by only DC, Maryland, New York, and Virginia).