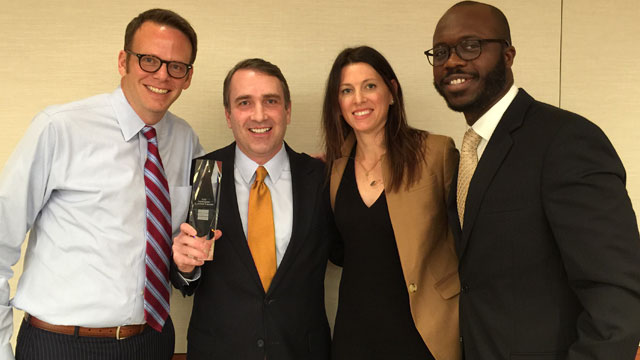 Named after John Mooty, the Mooty Awards represent hard work and dedication across all four of our firm offices. The awards were established in 2005 to publicly recognize members of the firm who have excelled in business development, client service, and have gone the extra mile for clients and coworkers. Past recipients include LAAs, paralegals, associates, principals, administrative staff, and attorneys.

The first recipient, attorney Ryan Gerads, was noted for his tireless work ethic and unwavering commitment to his clients. Presenter Steve Kutscheid praised Ryan’s approachable nature and dependable character, exemplified by a willingness “to meet clients on their terms,” whether it be on a hunting trip, the golf course, a sporting event, or even over a home-cooked meal. Kutscheid added that Ryan’s commitment to people extended beyond his portfolio: “He’s made the practice of law more enjoyable to so many people at GPM.”

Gaylen Knack then introduced Liz Dillon, who works in the Franchise & Distribution practice group. Dillon, who was recently recognized as an “Up & Coming Top Franchise Law Attorney” by Chambers USA and Chambers Global, was praised by her colleagues for bringing a unique blend of tenacity, wisdom, and empathy to her clients. “In her still rather short tenure, [Liz] is the go-to transactional franchise lawyer in the Minnesota legal community,” said fellow attorney Kate Nilan.

The third Mooty Award recipient was Lori Kleinschmidt, a legal assistant at the firm. Presenter Michael Gray praised Lori’s “relentless focus” of client interests, adding the she’s the best legal assistant he’s worked with in his more than three decades of legal practice. “She’s proactive,” Gray said. “She doesn’t just respond, she anticipates.” When Lori is not going above and beyond for clients, she can be found volunteering at the Woodbury Animal Humane Society, throwing dinner parties, and dabbling in gourmet recipes in her kitchen.

The ceremony closed poignantly when Mike Sullivan, Jr., the ceremony’s host, was called forward to receive an award. He was presented the award by Julia Offenhauser, a corporate attorney whom Mike has mentored for many years. Then attorney Al Coleman came forward to read a letter written by the recently departed Gene Hennig. In the letter, Gene explained how Mike courageously assisted him when Gene was compelled to precipitously wind down his practice after being diagnosed with brain cancer in November 2014. “There were many within our GPM family who assisted me during this challenging time,” Hennig wrote, “but Mike, more than anyone else, bore the brunt of handling the additional work that needed to be done.” Hennig added: “I am now gratified to report that since the end of November not a single client engagement was lost, thanks in large part to Mike’s willingness and ability to pick up the load for me.”

Congratulations again to our four exceptional Mooty Awards recipients, and thank you to all Gray Plant Mooty employees who continue to provide our clients with excellent service.