By Jesse Berg & Tim Johnson, with the assistance of Julia Marotte

On September 4, the Centers for Medicare & Medicaid Services (CMS) published a Final Rule that made several helpful changes to the meaningful use requirements for the Electronic Health Record (EHR) Incentive Program. Among other things, the rule provides welcome relief to the timeline for meeting Stage 2 and 3 requirements that many in the industry found to be quite aggressive. In addition, CMS agreed to permit continued use of 2011 versions of “certified electronic health record technology” (CEHRT) as opposed to requiring use of the 2014 editions of CEHRT. These and other changes announced in the rulemaking will make the job of complying with meaningful use standards a bit easier.

Background on Meaningful Use Program

The HITECH Act of 2009 established the ambitious goal of making all health care providers meaningful users of CEHRT. To encourage provider participation, the law adopted a “carrot and stick” approach. On the positive side, the program offered significant financial incentives, including payments for eligible professionals of up to $44,000 over five years in the Medicare incentive program or up to $63,750 over six years in the Medicaid incentive program. On the other hand, eligible professionals who failed to successfully demonstrate meaningful use by 2015 would be subject to a payment “adjustment” (i.e., a reduction in Medicare Part B reimbursement). The payment reduction starts at 1percent and increases each year that an eligible professional does not demonstrate meaningful use, to a maximum of 5percent. A key component of the program is that as time passed and providers became more accustomed to the use of CEHRT in their practices, they would be expected to meet ever more comprehensive standards for the way in which they used EHR technology in delivering care. These standards would be published by CMS in “stages,” starting with Stage 1 requirements (which participants would need to meet beginning in 2011). The Stage 2 standards, which build and expand upon the Stage 1 requirements, were issued in September 2012 and went into effect (for early adopters) in 2014.  Gray Plant Mooty issued a Health Law Alert discussing the Stage 2 requirements here.

Extension of Stage 2; Delay in Stage 3

The Final Rule provides a one-year extension of the Stage 2 requirements. Under the original timeline, a provider that first became a meaningful user in 2011 or 2012 was required to begin Stage 3 on January 1, 2016 (for eligible professionals), or October 1, 2015 (for eligible hospitals). However, CMS elected to delay this time frame so that it could analyze the data obtained during Stage 2 and use that data to inform the Stage 3 requirements. This will hopefully result in Stage 3 objectives and measures that are workable for providers. For providers that became meaningful users in 2011 or 2012, Stage 3 now begins on January 1, 2017 (for eligible professionals) and October 1, 2016 (for eligible hospitals and critical access hospitals). The following chart outlines the current timeline for meeting Stage 2 and 3 requirements: 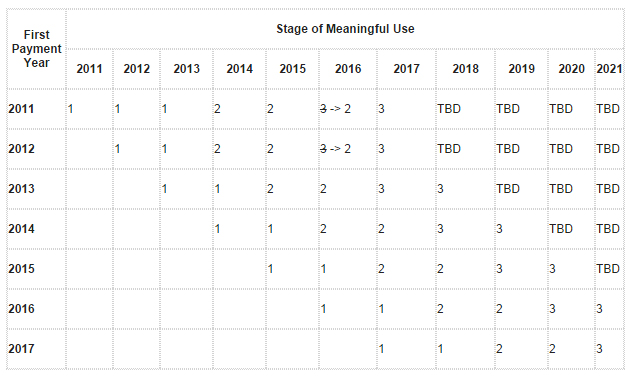 Continued Use of 2011 CEHRT Edition

Another key aspect of the program is that providers need to adopt EHR technology that is “certified” in accordance with standards adopted by HHS. The idea is that certified technology gives assurance to users that an EHR system offers the necessary capability, functionality, and security to help providers meet the meaningful use criteria. Certification is also intended to help providers and patients be confident that the IT products and systems they use are secure, can maintain data confidentially, and can work with other systems to share information. Over time, the certification standards will become more rigorous, thereby offering providers and patients a more robust tool for care delivery.

In 2012, HHS issued a regulation that established 2014 edition EHR certification criteria and a revised definition of CEHRT. The 2014 edition makes a number of changes, including adding nine new certification criteria applicable to both the ambulatory and inpatient settings, such as the ability to record, change, and access family history, and the ability to provide patients with an online means to view clinical data through a secured channel. Prior to the September 4 rulemaking, providers attempting to demonstrate meaningful use were required to adopt, implement, or upgrade to the 2014 Edition CEHRT.  However, due to software installation difficulties, testing delays, and availability issues, many providers were unable to implement 2014 Edition CEHRT. Basically, many in the industry felt that there was simply not enough time after publication of the Stage 2 final regulations to make the necessary changes to their EHR products that would enable those products to be certified in accordance with the 2014 edition of the EHR certification criteria.

The Final Rule seeks to ease provider concerns by granting flexibility in 2014 reporting. Providers now have three alternative reporting options for 2014 (depending on whether they are reporting under Stage 1 or Stage 2):

CEHRT SYSTEMS AVAILABLE FOR USE IN 2014 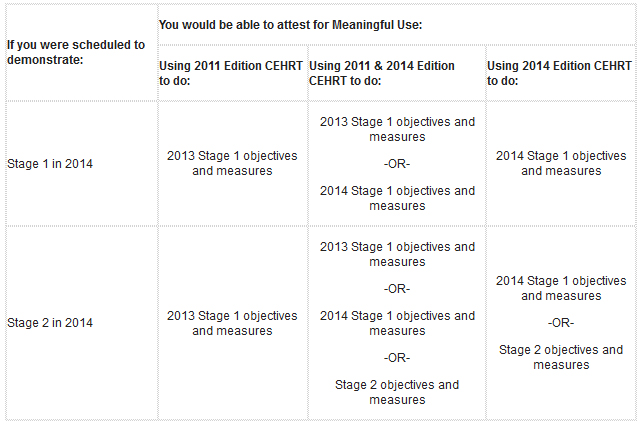 Is it too late to get in on the Program?

A copy of the Final Rule is available on the Federal Register website.