Benjamin Podobinski assists clients in various litigation. He has experience in trial preparation including witness preparation, cross-examination, conducting depositions, and drafting pertinent documents like exhibit and witness lists, and trial and post-trial briefs.

While earning his undergraduate degree, Ben was a member of St. Thomas’s varsity Baseball team, earning All-Conference and All-Region honors on teams that made appearances in the NCAA World Series in 2012 and 2014, finishing third both years.

Between undergrad and law school, Ben worked as a Consumer Analyst in the Office of the Minnesota Attorney General, where he handled mediations on behalf of Minnesota residents and researched consumer justice issues. 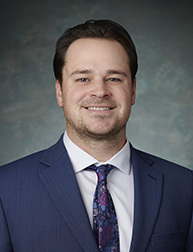