Much Ado About Little Numerous Employment-Related Bills Stall Out in Minnesota Legislature
By Dean A. LeDoux on May 24, 2019
Posted in Employment Law Updates, Wage & Hour, Workplace Safety 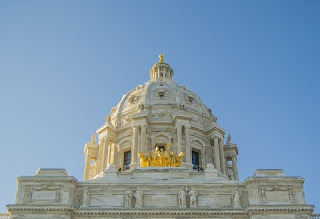 Although the recently completed 2019 regular session of the Minnesota Legislature included a significant number of bills on various employment-related topics, in the end, the Legislature passed very few such bills. The future fates of those bills are quite unclear at this time. As of the close of the regular legislative session, numerous employment-related bills were still active, in either one or both legislative bodies, touching on a variety of significant topics, including:
The Governor just announced last evening (May 23) that he would call a short special legislative session to allow the Legislature to pass some remaining omnibus budget bills.  It is expected to be a short session, likely running for three days.
Wage theft protection language was agreed to this week by the Legislature, after the close of the session, and will be included in a special session omnibus jobs bill. The omnibus jobs bill will include provisions on: employer-mandated record keeping (on wages, hours worked, benefits, etc.); notice to employees on mandatory wage and benefit information and acknowledgement forms to be signed by employees; penalties for violations of the new laws; enforcement provisions; and other miscellaneous points. The statutory penalties include elevating wage theft of $1,000 or more to become a felony. The new laws will take effect August 1, 2019, if signed into law by the Governor, as expected. Final language for the various statutory amendments and additions is not yet available.
No other labor provisions that had been under consideration in one legislative body or the other were included in the omnibus jobs bill.
Potential bills on a modification of the sexual harassment standard, in particular, received significant attentionin the Legislature and received support from both parties. The proposed legislation would change the definition of sexual harassment under Minnesota law to provide that sexually offensive behavior need not be severe or pervasive in order for it to form the basis for a sexual harassment claim. Any such change in the law could significantly expand employers liability for sexual harassment claims.
Given the significant amount of focus by both arms of the Minnesota legislature in the past year, the next legislative session appears likely to see much of that activity carry over. The split in political party control in the Minnesota legislature, with Republican control of the Senate and Democratic control of the House, may make it difficult for many of the previously pursued, but not passed, bills to ultimately obtain passage. The modification of the sexual harassment standard is perhaps the most likely to gain further traction with the Legislature.