Independent Contractor vs. Employee The Tug of War Continues
By Dorraine A. Larison on May 8, 2019
Posted in Hiring & Firing, Wage & Hour 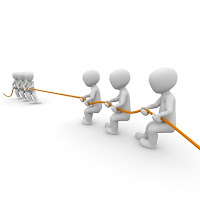 Two recent developments have occurred in the seemingly constant struggle regarding the classification of independent contractors versus employees. The developments are examples of two very divergent paths that are being taken by various governmental entities and administrations. Some are tightening the requirements for independent contractor status. Others, however, are creating a more business-friendly loosened standard.
On Monday, April 29, 2019, the Wage and Hour Division of the United States Department of Labor (DOL) issued an opinion letter (Opinion Letter) regarding the classification of independent contractors under the Fair Labor Standards Act (FLSA). This first opinion letter on the topic under the Trump administration is in stark contrast with the DOL guidance issued during the Obama administration (and later withdrawn by the Trump administration in 2017). The Obama era guidance took the position that most workers should be classified as employees under the FLSA, while the new Opinion Letter is more employer friendly.

The new Opinion Letter, which was issued in response to a request from an anonymous virtual marketplace company, addressed whether certain individuals who provide services through the company are employees or independent contractors. The Opinion Letter concludes that economic independence is the touchstone of employee versus independent contractor status. According to the DOL, economic dependence is evidenced by the following six factors:
The DOL concluded, after applying the six factors to the virtual marketplace companys situation, that the individual service providers are independent contractors. In particular, the DOL noted that the service providers have flexibility to choose when, where, how, and for whom they will work.
The DOL Opinion Letter comes after an earlier decision of the National Labor Relations Board (see our previous post here) which similarly overturned an Obama-era decision and relaxed the test for independent contractor status under federal labor law.
In contrast with the DOLs and NLRBs loosened standards, as we have previously reported (link to article), the Supreme Court of the State of California established a new pro-employee standard in the classification battle in 2018, ruling that there is a starting presumption that all California workers are employees. Thanks to a decisionof the Court of Appeals for the Ninth Circuit issued on May 1, 2019 (Dynamex Operations West, Inc. v. Superior Court), we now know that Californias new pro-employee standard will apply retroactively. In other words, employers in California may find that once valid and correct classification of workers are now improper.
Based on the constant tug of war between administrations and the state and federal governments, employers should stay aware of the current status of worker classifications and be prepared to make changes to their worker classifications where necessary.