Frank Sciremammano is a diligent problem-solver, tackling the toughest litigation issues faced by his clients. Working primarily with businesses, he recognizes that each client's ideal resolution will differ — whether that means a win in the courtroom, a well-crafted settlement, or a sizable arbitration award. No matter the desired outcome, Frank provides thorough and efficient representation in service of his clients' business objectives.

Frank focuses on franchise, distribution, and other business litigation and white collar defense matters. He advises some of the nation's largest franchisors and regularly defends and prosecutes cases on their behalf in matters involving the enforcement of covenants not to compete, vicarious liability, business torts, and trademark infringement, among others. Frank's experience also includes representing clients in commercial contract disputes and defending individuals in connection with various fraud and trade secret disputes. He represents clients ranging from individuals and small employers to public entities and international corporations.

Before attending law school, Frank worked as a radio personality in top 40 and alternative rock radio, and also as an afternoon traffic reporter for CBS Radio in Rochester, NY. 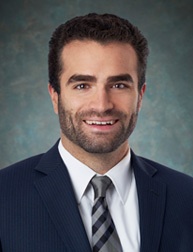