Edward concentrates his practice in the area of general corporate and business law, mergers and acquisitions, and commercial real estate. He represents individuals as well as small, mid-size, and large businesses on the wide range of legal issues encountered throughout the entirety of a business’s life cycle, including corporate formation, governance, and contract negotiation.

While in law school, Edward was a staffer and managing editor for Minnesota Law Review, a judicial extern for Judge John Scherer of the Seventh Judicial District in St. Cloud, Minn., and a judicial extern for Judge Tony N. Leung with the United States District Court in St. Paul. Prior to joining the firm as an associate, he worked as a summer associate for Gray Plant Mooty in St. Cloud and as a law clerk for Gray Plant Mooty’s health law group in Minneapolis.

Edward earned his B.A. from St. Norbert College, where he was an all-conference athlete in both football and baseball. Before beginning his legal career, he earned an M.S.W. from Boston College and spent several years working as a bilingual youth and family counselor, a wilderness therapist, and social worker. Additionally, he was on the Adjunct Faculty in the Department of Psychology at William Rainey Harper College, and worked as a co-author and editor for Hall Hill Press where he co-wrote and edited Tread Softly: Bullying and the Death of Phoebe Prince. 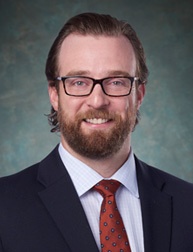